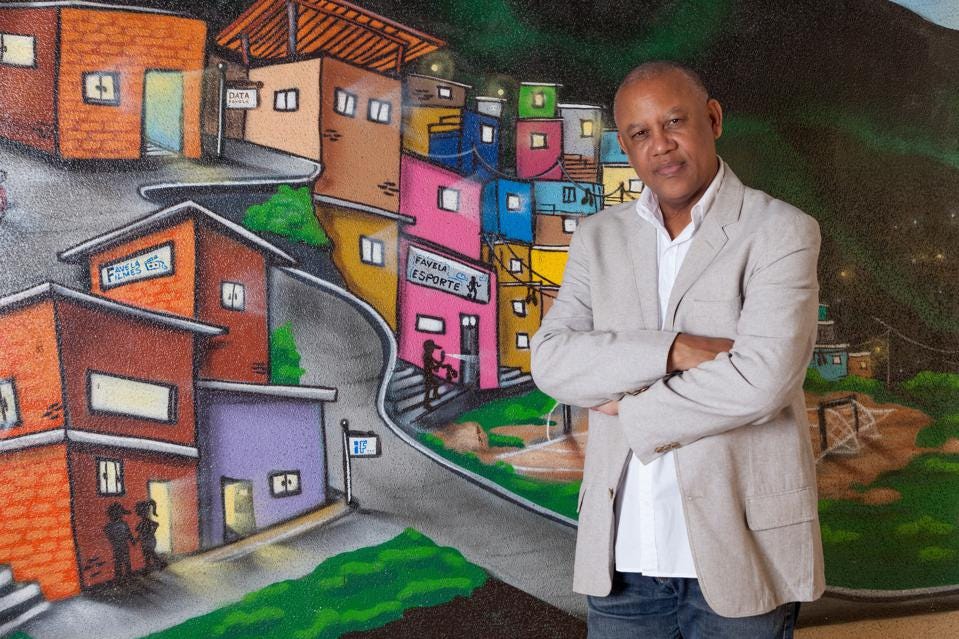 One of Brazil’s best-known social entrepreneurs, Celso Athayde, is at the cusp of a major shift towards digital businesses emerging from the country’s favelas(slums), with the creation of a fund aimed at backing the next generation of tech talent from underserved areas nationwide.

Less than two years away from turning 60, Athayde’s trajectory is nothing short of inspirational. Born in the outskirts of Rio de Janeiro, the self-taught businessman lived on the city’s streets, public shelters and in some of its roughest slums, selling everything from candy to hotdogs in trains to make ends meet as a child.

Later, he became a market trader as a teenager and immersed himself in the music business, in what was the start of a plethora of initiatives that would include several published books, film projects, and the foundation of non-profit organization Central Única das Favelas (CUFA), alongside Brazilian rapper and social activist MV Bill in 1999.

Present in more than 5.000 slums across Brazil and 20 countries globally, CUFA is focused on empowering young favela dwellers through projects in areas such as education, culture and sports. The NGO took on a leading role in supporting communities through the Covid-19 pandemic by channelling millions of dollars’ worth of corporate donations to initiatives including basic income and connectivity, impacting nearly 6 million people nationwide.

However, the NGO’s original mission is to provide youth with alternatives to crime whilst bringing their views to the outside world. “The favela has to be recognized not as a lacking territory, but as a source of power and resilience: this is the view that informs our work”, says Athayde, in an interview with FORBES.

According to Athayde, one of the recipients of Schwab Foundation for Social Entrepreneurship’s Social Innovator of the Year Award in 2021, the qualities inherent to favela ecosystems present a massive opportunity for generation of wealth and social development for those communities.

“[Favela-based consumers] may not buy certain items that are exclusive to [wealthier consumers], but they will acquire products that are tailored to their realities, meaning there is a thriving economy in the favela – and companies have started to realize that”, he points out.

In 2013, Athayde created Favela Holding (FH), which currently encompasses 24 companies operating in segments ranging from market research to travel and logistics, all focused on the needs of favela consumers. Created as a means to provide the financial support to CUFA’s activities, FH has a portfolio that has recently been expanding with technology companies such as Alô Social, a mobile virtual network operator (MVNO) in partnership with Telecom Italia’s telecommunications firm TIM.

Alô Social was created to address the connectivity needs of schoolchildren studying remotely during the pandemic. Currently with a base of more than 500.000 customers, the company wants to exceed the 1.5 million customer mark by the end of 2022. The prepaid SIM cards are sold through a network of agents, who receive a 7% commission on top ups purchased by clients thereafter.

Favela Holding also includes other companies created during the pandemic that are directly focused to the new economy. An example is Digital Favela, an agency connecting social media micro-influencers with brands. The company’s clients range from media conglomerate Globo to drinks giant Ambev.

“I’ve launched these businesses because I believed the pandemic was going to end in 2020, and donations would start to dwindle”, Athayde points out. “On the other hand, the pandemic was a massive blow to the economy, and people [living in slums] would need a lot more support to recover.”

This reorganization of the economy post-Covid in these communities inevitably goes through technology, Athayde says. “Even though favelas have their talents and areas of specialism, they will have to increasingly use technology to promote and sell what they do”, the entrepreneur says, adding his goal is to create more digital businesses to make remote working more common in favelas nationwide.

“[Wider adoption of remote working] is not a reality in favelas, but it has to be. We have to accelerate that process”, he says. Examples of how this vision is taking shape include the recent Free Fire e-sports championship organized by CUFA and sponsored by banking giant Itaú. The event attracted hundreds of competitors, with matches streamed to audiences of up to 1 million people.

“The numbers [of the Free Fire championship] show that a lot of people were tuned into [the streamed events] and could be earning money from that too. This is the perception that we want to develop among young favelados“, Athayde says.

Key to the social entrepreneur’s plans to place the digital economy at the center of the economy of Brazil’s favelas is the creation of a fund, with an initial target of 50 million reais, to be launched in the first quarter of 2022.

Under the new vehicle, which has attracted commitments from a number of Brazilian high-net-worth individuals and large companies that already support CUFA’s activities, the goal is to primarily foster technology businesses led by favela entrepreneurs.

“The priority will be investments in businesses where technology is a key pillar”, says Athayde, citing segments such as last-mile logistics, education, mobility and digital marketing as examples of areas the new fund might invest.

In addition, the entrepreneur expects that all new businesses under the Favela Holding umbrella will have a strong focus on creation of digital skills. “We want to train and prepare people for this future which is already here”, he points out.

Despite the hundreds of accolades received in recent years, the successful partnerships with many of the largest businesses operating in Brazil that have enabled his projects, as well as his accomplishments to date, Athayde is not planning to slow down anytime soon.

“When you get to a certain point and realize the relevance of the things that have been done so far, you realize that you can do more”, he says, adding thoughts of retirement make no sense given the bridges he can still build between the favela and leaders of the modern economy.

“My project has always been about the collective, and I firmly believe we need to share the wealth produced by the asphalt [the businesses] with the favela, or continue to face the consequences of inequality”, Athayde points out.

In a year’s time, Athayde plans to have at least 70 companies operating under Favela Holding. “All of these companies will be led by favela entrepreneurs, employ a lot of people and enable many others to set up their own businesses”, the social entrepreneur says.

“I would like to see more favela entrepreneurs and businesses emerging, as well as more competition. If I ever go bankrupt because the market is crowded with companies from favelas, I will be the happiest guy in the world,” he concludes.

« 3 Ways You Can Use Digital Tools To Boost Student Motivation

You can find out more about which cookies we are using or switch them off in settings.

This website uses cookies so that we can provide you with the best user experience possible. Cookie information is stored in your browser and performs functions such as recognising you when you return to our website and helping our team to understand which sections of the website you find most interesting and useful.

Strictly Necessary Cookie should be enabled at all times so that we can save your preferences for cookie settings.

If you disable this cookie, we will not be able to save your preferences. This means that every time you visit this website you will need to enable or disable cookies again.